One of the greatest challenges as a manager is delivering bad news. For many managers – especially first time, or novice managers – the experience of delivering bad news, during a layoff conversation or even a negative performance review – can be surprisingly emotional. People can feel sympathy for the victim. They can feel confused or even frustrated or angry about the fact that they have to deliver the message in the first place, especially if it’s a message that they didn’t necessarily endorse in the first place. And they can feel nervous – sometimes exceedingly nervous – about doing something that they know is going to cause pain and discomfort to another human being.

Along with my colleague Joshua Margolis, I have studied these conversations for many years, and one thing we discovered in this work is that when managers fail to keep their emotions in check when delivering bad news, they can fall prey to five different dysfunctional conversation types.

This is when you allow the conversation to become a negotiation when it really can’t be one. When employees receive negative news, it’s the most natural thing in the world to engage in what one manager in our research study called the “but why?” conversation — “But why do you have to do this?”… “But why is this necessary?”… “But why does it have to be me?”. But assuming this truly is a message you have to deliver, you can’t as a manager fall into this trap of the “but why” conversation. You certainly can – and should be — compassionate with your delivery, but you cannot stray from your message.

You’ve probably seen or heard of an example of someone breaking up with a girlfriend or boyfriend and being so indirect and obtuse about the message that the person in question doesn’t actually even understand they’re being dumped! That’s cushioning: where, as a person delivering a negative message, you soften the blow, but in doing so, you actually end up confusing the other person since they have no idea what you’re saying.   You’d think this might be uncommon in the corporate world, but it’s not. In one organization we studied managers were told to mention termination within the first 10 seconds of the meeting in order to guard against this exact dysfunctional conversation type. 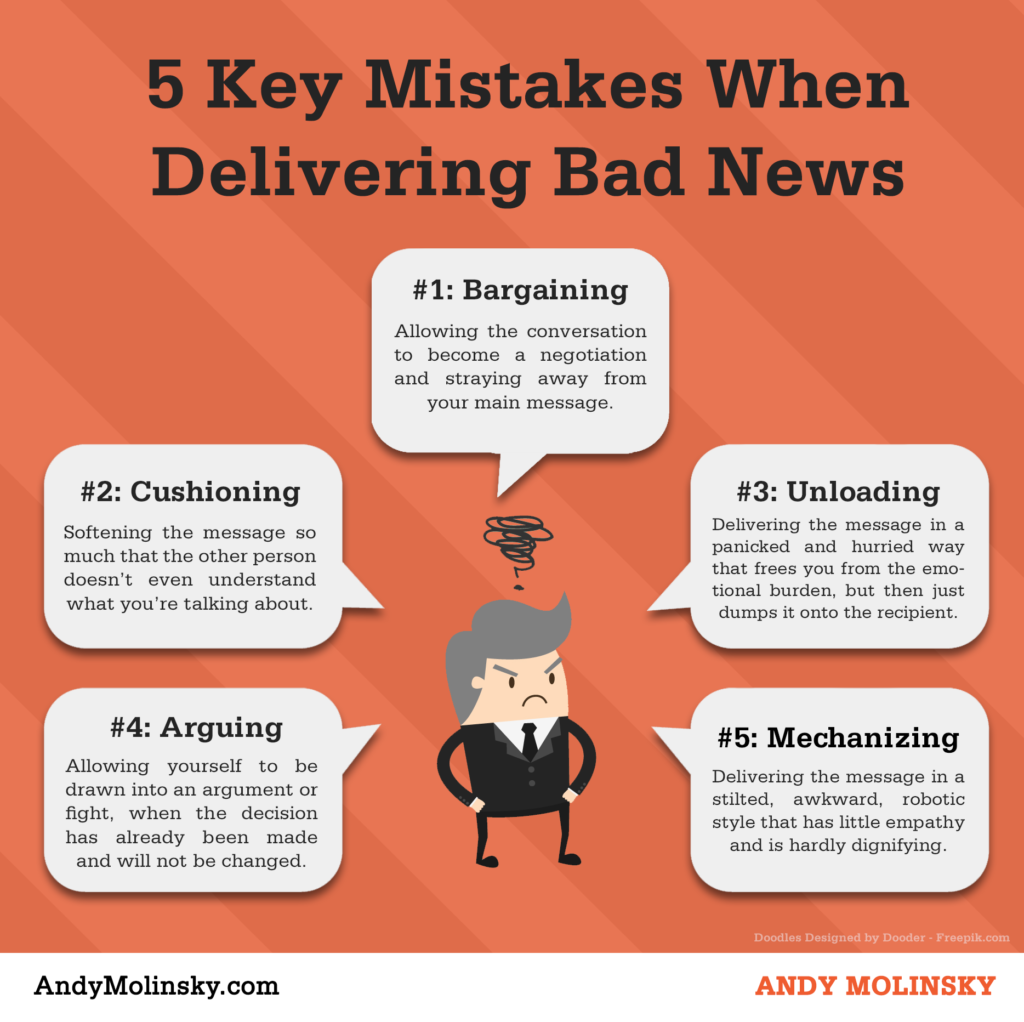 With unloading, the person delivering the message simply can’t control his or her feelings. And they unload: they deliver the message in a hurried, panicked way – freeing themselves of the emotional burden they had been carrying and unloading it onto the victim. And as you can imagine, the message delivered is often less than dignifying and interpersonally sensitive.

Sometimes people receiving negative news feel it’s unfair. They want to fight back and argue. And as a person delivering the message, you can’t let this happen. You need to control yourself in a way that diffuses a potential conflict instead of fueling the fire. For example, one company we worked with told managers to: (a) listen, (b) allow employees to vent, but then to restate their message again, clearly and succinctly. It can feel impersonal, but such a method avoids arguing and enables you to actually deliver the message you were intending to.

None of us wants to fail at delivering bad news.  But unless we learn to control our emotions and recognize these dysfunctional conversation types, it’s unlikely we’ll  be able to treat the recipients of our messages with the dignity they deserve.

Have you ever let emotion get the best of you in a difficult conversation?

Andy Molinsky is a Professor of International Management and Organizational Behavior at the Brandeis International Business School. He is the author of GLOBAL DEXTERITY (HBR Press, 2013) and REACH: A New Strategy to Help You Step Outside Your Comfort Zone, Rise to the Challenge, and Build Confidence (Penguin, forthcoming – early 2017).

You’re More Resilient Than You Give Yourself Credit For

You’re More Resilient Than You Give Yourself Credit For

In my role as a professor at the Brandeis International Business School, I teach a course each fall about acting outside your comfort zone.

The Reach Interview Series is an informal dialogue between Andy Molinsky and respected thought leaders about the challenges of stepping outside your comfort zone, especially in the process of developing yourself as a leader.

The Mistake Most Managers Make with Cross-Cultural Training

The Mistake Most Managers Make with Cross-Cultural Training

Mark is an HR director looking to improve his company’s cross-cultural skills, especially in Germany where his company is doing an increasing amount of business.